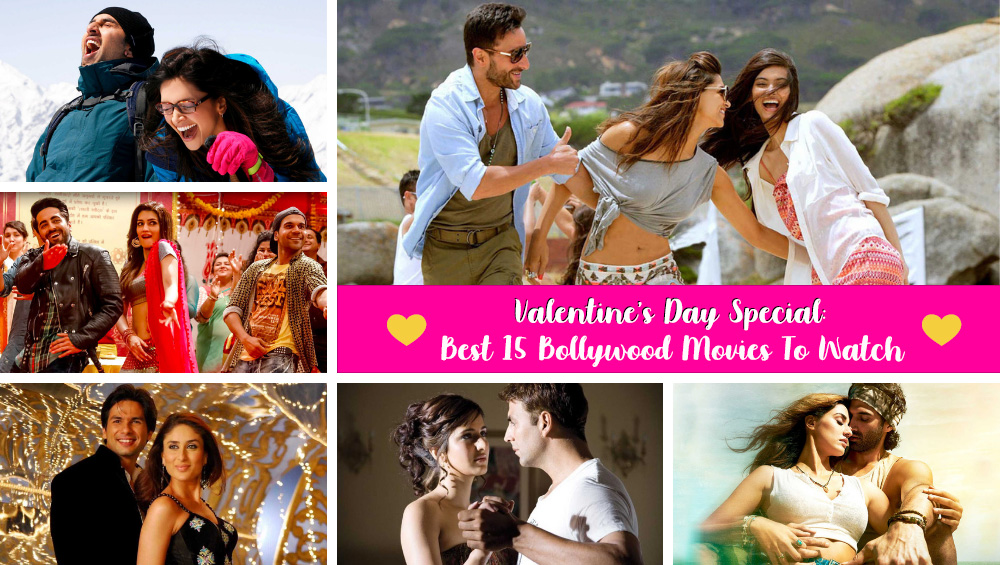 Valentine’s Day is nearing, and if you are looking for date ideas, then you are in the right place. Well, if you and your partner live in the same city or you are in a long-distance relationship, celebrating a movie night is a great idea when it comes to planning date nights. There are a lot of romantic movies in Bollywood which have touched upon the topic of love profoundly. Here’s your cheat sheet about the top 15 Bollywood movies that you will enjoy watching with your loved one on this Valentine’s Day.

If you are someone who adores and abides by Bollywood’s theory of love, then these movies will be a perfect pick for a movie night. And guess what it doesn’t include your usual movies like Dilwale Dulhaniya Le Jayenge, Kuch Kuch Hota Hai, or Dil Toh Pagal Hai. Scroll through the list of 15 best Hindi movies that you will enjoy with your spouse, partner, or BFF on this Valentine’s Day. (Also read: Not Every Relationship is About…)

“Ishq di mere mitra pehchaan ki. Mit jaave jadon jid apnan di!” With Akshay Kumar and Katrina Kaif as the lead pair, Namaste London was a blockbuster success! If you watch it once, you’d like to watch it again. Given it’s storyline, musical numbers, and Akshay-Katrina’s chemistry at the very best, you would not want to miss this gem of a romantic film!

When it comes to love, it’s the one movie you cannot miss. To see the unbending Narayan Shankar (Amitabh Bachchan), stout-hearted Raj Aryan Malhotra (Shah Rukh Khan), and ever-beautiful Aishwarya Rai on a single screen would even spark the most dormant of volcanoes! A feel-good film, you’ll be charmed by the young-adolescent chemistry of on-screen pairs, its songs, cinematography, and much more! Ps: Do not miss out!

Jab We Met is still Kareena Kapoor’s best movie till date! Not to forget the suave Shahid Kapoor, who played his role of Aditya Kashyap diligently. Their chemistry onscreen was simply outstanding. With an amazing storyline and scintilating musical numbers, Jab We Met acquired a cult status. It’s the movie that announced the arrival of Imitaz Ali on the grand stage!

Another cult classic on the list, Yeh Jawani Hai Deewani happens to be one of the most popular Bollywood movies of all time. With Ranbir Kapoor and Deepika Padukone as the lead role, the movie articualtely touched upon the topics of friendship, love, career, relationships, et al. To add to it, its soulful music and party tracks are still very much a part of everyone’s playlists.

Barielly Ki Barfi may look like a typical romantic comedy movie, but the film touched the nuances of love in a very coherent manner. One could relate to the roles of Bitti Mishra (Kriti Sanon), Chirag Dubey (Ayushmann Khurana), and Rajkummar Rao (Pritam Vidrohi) very seamlessly. The songs in the movie would tickle your soul, irrespective of your good, happy, or sad mood. (Also read: Time-Travel Poem: They Met, For The First Time; Their Eyes…)

Being a traditional successor to the 1990’s Aashiqui, Aashiqui:2 lived upto the expectations very well. It put Shraddha Kapoor and Aditya Roy Kapoor on the big stage as the film went on to earn 10 times it budget. The music and lyrics of the songs in Aashiqui 2 were so moving that it would leave you teary-eyed. Ps: “Aarohi?” “Haan?” “Kuch nahi, bas yun hi!” – you guys remember?

It’s a cutesy, lovey-dovey, and a very relatable Bollywood flick, which stars Ayushmann Khurana and Bhumi Pednekar. The romantic comedy-drama successfully took on the societal stereotypes and steered right through them in several ways! Dum Laga Ke Haisha is one movie you’d like to watch with your partner time and again.

Cocktail was a perfect recipe (read: film) that depicted love, friendship, and romance in a different light. The trio of Saif Ali Khan, Deepika Padukone, and Diana Penty were widely praised for their performances. The storyline was fresh, crazy to say the least, and the relationships were beautifully depicted with both fizz and fervour. (Quick Read: The Unexplored Terrain: I Know He Loves Me, But…)

If there’s anything missing on this list, it’s a period romantic drama. Starring Shah Rukh Khan, Rani Mukerji, and Priety Zinta, Veer Zara will melt your heart like no other film. The movie’s story, dialogues, songs, screenplay were too soulful. Directed by Yash Chopra, the film was nominated for a staggering 15 categories at Filmfare Awards, of which it won four.

Building on their successul chemistry in Aashiqui 2, both Shraddha Kapoor and Aditya Roy Kapoor were the lead pair in the movie. Ok Jaanu is a remake of a Tamil film O Kadhal Kanmani. The romantic drama film was praised for its fresh outlook. If you are looking for a light-hearted movie to watch on a date night this Valentine’s Day, Ok Jaanu should be your first pick. (Also Read: If you love Hollywood movies, here’s your list of top 15 English movies to watch with your loved one)

Other movies in the list that you should must watch are:

When it comes to love, no other cinematic-verse takes liberty as much as Bollywood does. Well, a lot of times it goes over the head, but it is a rarity that few movies go straight to your heart. Well, the movies are not set in any kind of order. You can pick and choose anyone gem out of the 15. (Quick Read: I Need to Do This Because I Deserve to Be Happy ~ By Soumya)

Also, if your relationship status reads single this Valentine’s Day, you can indulge in bingewatching some of these gems too. All you need is a good internet connection! Do let us know in the comments section below about your favourite movie which you’d suggest to watch this Valentine’s Day.