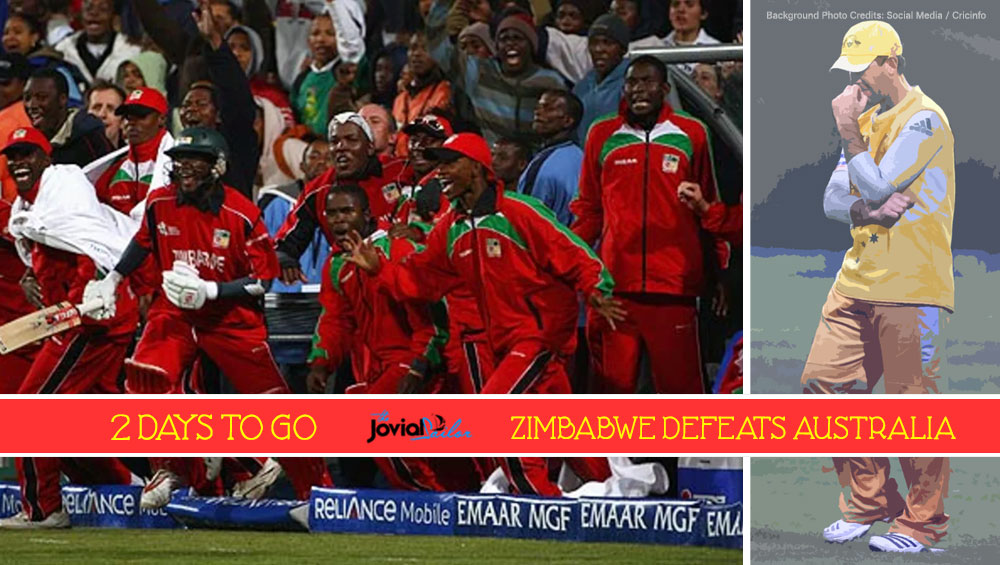 Zimbabwe Beats Australia: When Zimbabwe beat Australia at ICC World Twenty20, 2007, even Zimbabwe wouldn’t have thought of pulling off such a heist. It was a memorable night where Zimbabwe staged one of the biggest upsets in cricket history. After the loss, Aussie skipper Ricky Ponting admitted that Australia should start respecting the (T20) format “a bit more”. It was, indeed, an embarrassing defeat for the World Champions – Australia – who were playing their first competitive match after WC 2007 final. With ICC T20 World Cup 2021 only a couple of days away, let’s take a look at one of the most memorable matches in T20 history!

The hero of the night was Brendan Taylor. His calm and composed inning was filled with crafty strokes and exuded confidence. Taylor scored 60 runs off 45 balls, where he hit 4 fours and 2 sixes. With Australia trying their best to throw everything in their arsenal, there was no chink in Taylor’s armour that night. Click here to download the Free PDF ICC T20 World Cup 2021 Schedule.

Australia won the toss and elected to bat first. It was a blessing in disguise for Zimbabwe, who anyway wanted to bowl first in the match. Elton Chigumbara was the pick of the bowlers as he sent back both openers Adam Gilchrist and Matthew Hayden cheaply in his first two overs. Soon, skipper Ricky Ponting’s brief misery (8 runs off 15 balls) at the crease was ended by Gary Brent.

Elton Chigumbara and Gary Brent picked 2 wickets each, while Prosper Utseya and Hamilton Masakadza picked one each. However, quick cameos by Andrew Symonds (33) and Brad Hodge (35) helped Australia reach a respectable score of 138/9. (Also Read: ICC T20 World Cup 2021: All You Need To Know About Teams, Groups, Venues, Format, And Dates)

In reply, Zimbabwe had a solid start with the opening pair scoring 31 runs for the 1st wicket. Brendan Taylor held one end, while wickets kept falling on the other. However, Taylor found support in Hamilton Masakadza, as the pair added 53 runs off 46 balls. With 12 runs needed in the last over, Talyor’s timely heroics helped Zimbabwe script a historic win!

Zimbabwe beating Australia, and that too at an ICC World Cup event, would not have been even dreamt of by anyone. On the contrary, Australia had started the tournaments as one of the favourites. And to be beaten by an underdog in a last-over thriller paints a different picture altogether.

The grandeur ICC World T20 is only a couple of days away and the fan’s excitement is sky-high. As we near the beginning of the World Cup, here’s a quick highlight of the marquee event:

Zimbabwe hasn’t qualified for the ICC T20 World Cup 2021. But Australia has been slotted in Group 1. The Aaron Finch-led side will play their opening encounter against South Africa on October 23. Will there be any upset this time around? Well, it is for time to tell. In the meanwhile, take a look at the squad of the Australian team, travelling reserves.