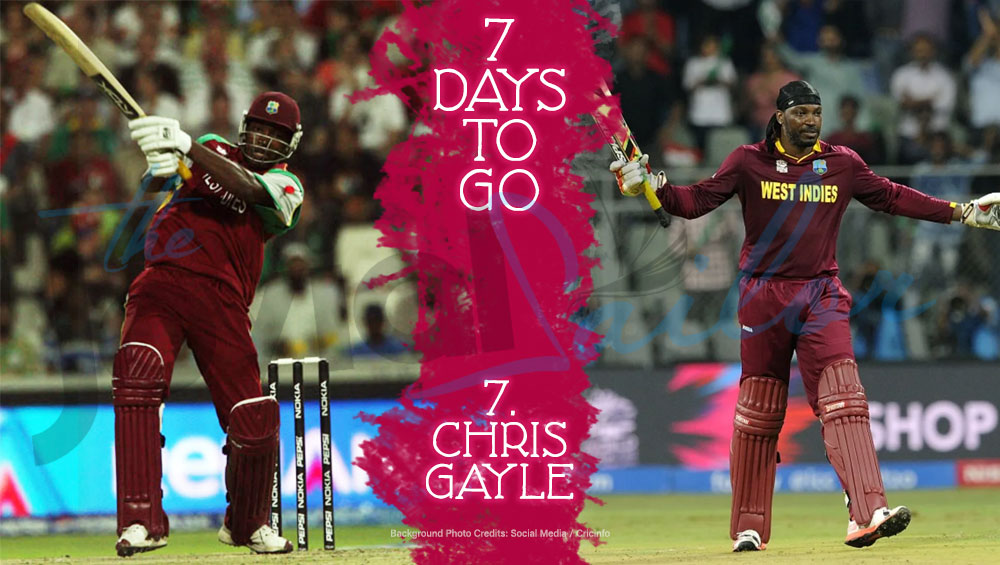 Chris Gayle’s Fastest T20 Century: Christopher Henry Gayle needs no introduction. Popularly known as ‘Universe Boss’ and ‘Six Hitting Machine’, Chris Gayle’s records speak volumes of his greatness in T20s. Gayle holds the record of scoring the fastest century in an ICC T20 World Cup, twice – in 2007 and 2016. Gayle’s 47-ball hundred against England in the T20 World Cup 2016 happens to be one of his best knocks to date. Five years later, he still holds the record of hitting the fastest century at the ICC T20 World Cup.

With T20 ICC World Cup 2021 only a week away, we at The Jovial Sailor present to you our special coverage. In these 7 days, we will be bringing you the best moments of the previous T20 World Cups. Before the 7th ICC T20 World Cup event begins in Oman on October 17, take a look at the list.

Chris Gayle bettered his records in 2016 after he set them during the inaugural edition of the T20 World Cup. In the 2007 T20 World Cup, Gayle scored a 50-ball ton against South Africa. He hit 10 sixes and 7 fours in his innings of 117 runs off 57 balls. Click here to download the Free PDF ICC T20 World Cup 2021 Schedule.

In 2016, the Jamaican went a step ahead and hit 11 sixes in his match-winning effort of 100 runs. To everyone’s delight, he only took 47 balls to reach the milestone figure. No England bowler was spared, and it was Moeen Ali who bore the most brunt. Gayle scored 33 runs off 14 balls, which included 3 consecutive sixes in an over. West Indies went to win the match with 11 balls to spare.

Jos Buttler (30), Alex Hales (28) and Eoin Morgan (27) contributed well after they were asked to bat first by the Windies. Riding high on Joe Root’s herculean effort (48 runs off 36 balls), England scored 182/6 in the first innings. While chasing, the Caribbean team had a rocky start as they lost Johnson Charles early. However, calm innings by Marlon Samuels and a Gayle-storm saw Windies cross the finishing line with ease. (Also Read: ICC T20 World Cup 2021: All You Need To Know About Teams, Groups, Venues, Format, And Dates)

Chris Gayle’s exploits in the shorter formats of the game are well-known. After setting the record in 2007, and bettering it at the 2016 World Cup, Gayle is a reckoned force in T20s.

Selected in Windies’ squad for T20 World Cup 2021, will Gayle power his country to another title win? At 42, does Gayle still have the firepower to decimate bowling attacks as he did in his prime? Well, it will be an interesting watch in the upcoming few weeks.

West Indies are set to begin their T20 World Cup 2021 campaign against England on October 23. Take a look at all the teams, their respective squads and travelling reserves for ICC T20 World Cup’s 7th edition.